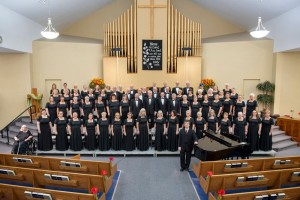 GCS, with some 80 amateur singers, has been delighting audiences since its formation in 1971. Our rehearsal and performance home is the Christian Reformed Church in Georgetown, Ontario. Our choral director, Christopher Dawes, is a freelance professional musician and is among Canada’s leading church musicians, concert organists and choral accompanists. He performs across a wide spectrum of the Toronto music scene and occupies a range of musical leadership positions.

GCS is a registered charity performing a variety of musical genres, including classical, pop and folk, and from sacred to secular, at a level normally associated with professional groups. It has performed at Toronto’s Roy Thomson Hall, the Ford Centre in North York and the Mississauga Living Arts Centre. It has also performed in Holland and Ireland.