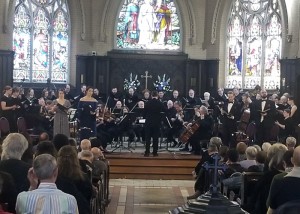 The Toronto Mozart Players, operated by the Mozart Project, is a professional ensemble dedicated to engaging audiences and enriching lives through high quality performances of concert music. Specializing in the music of Mozart and his contemporaries, the ensemble performs a broad repertoire from the early 18th century to the 21st century under the direction of artistic director and conductor David Bowser. With commitment to Canadian repertoire and commissioned works by Canadian composers, the Toronto Mozart Players present world premieres along with classical repertoire.

During the 2019/20 concert season, performances include: Handel’s Organ Concerto in F, Haydn’s Symphony No. 6 and Mozart’s Requiem.