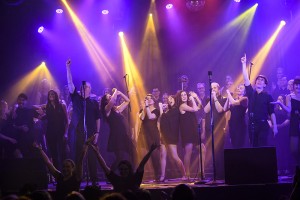 All voice. No limits. SoundCrowd’s vision is: to enrich the Toronto community with the proven health and social benefits of participating in and experiencing choral music; to make connections through voice and movement using repertoire that is exciting, fun and meaningful to all; and to create dynamic and original performances of music from all genres using the musical language of a cappella.

SoundCrowd, the brainchild of artistic director Scott Pietrangelo, is Toronto’s first large-scale a cappella ensemble. The group made its concert debut in 2016 alongside former Barenaked Ladies front man Steven Page at Toronto’s Danforth Music Hall. Since then, they have been featured guests on a national TV show (The Social, www.thesocial.ca) and created viral music videos, performed at other notable Toronto venues (Princess of Wales Theatre, The Opera House), repeatedly sold out their own high-energy concerts, and travelled to New York City to perform at Carnegie Hall with choirs from around the world under the direction of Deke Sharon (Pitch Perfect, The Sing Off). SoundCrowd is an auditioned choir and accepts new applications in spring and summer.