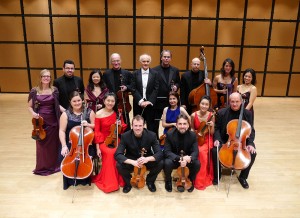 Acclaimed as “a world-class orchestra,” (Russelsheimer Echo, Germany), Sinfonia performs, under the leadership of music director Nurhan Arman, in CBC’s Glenn Gould Studio and the Weston Recital Hall at the Toronto Centre for the Arts, as well as presenting innovative school programs. The orchestra has recorded for Marquis Classics, Cambria and Analekta, and won a JUNO Award for Best Classical Recording in 2009. The orchestra’s repertoire includes all the major compositions for string orchestra from the Classical, Romantic and contemporary periods. Sinfonia Toronto premieres many new works and has been recognized by the Canada Council for the Arts for its commitment to performing music by Canadian composers.

Sinfonia Toronto also plays every season on the main concert series in Barrie and Sault Ste-Marie, and has toured to other cities around Ontario from Brockville to Sarnia. The orchestra has enjoyed great success in international tours in Germany, Spain, Florida, and most recently on their 2018 tour in Peru, Argentina and Uruguay where every performance drew standing ovations and reviews such as one in the Buenos Aires Musical Tribune that hailed the orchestra’s Mozart Divertimento and the Dvořák Serenade as “definitive performances.”