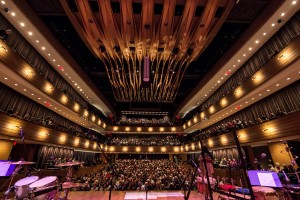 The Royal Conservatory’s Koerner Hall is “the greatest venue in this city” and “magnificent in its acoustics, as much as in its design” (Toronto Star) and voted “Best Concert Hall” in NOW’s Best of Toronto Awards 2017. This year at Koerner Hall, our 11th season, we bring you extraordinary international and Canadian artists. W are beginning to celebrate Beethoven’s 250th birthday - festivities that will continue over two concert seasons. With close to 100 Koerner Hall concerts to choose from in the 2019/20 concert season, the season also features The Conservatory’s renowned faculty and students performing in The Royal Conservatory’s two additional concert venues, Mazzoleni Hall and the Temerty Theatre, all located in the TELUS Centre at 273 Bloor St. West.

We look forward to seeing you, often!