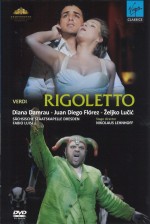 Verdi was a revolutionary figure himself, often fighting authorities and even having a difficult time getting his Rigoletto performed. The original play by Victor Hugo caused such an uproar in Paris that it disappeared after opening night. Defiantly Verdi chose it as a perfect vehicle for his new opera but it was forcibly transferred to an obscure Italian principality to placate the Venetian censors. Revolutionary, avant-garde German director Nicolaus Lehnhoff was therefore an apt choice to create a new look for Dresden. His concept is good versus evil or tormentors versus victims merged into a surreal nightmarish dream, a dark void, sometimes stained in blood red, populated by scary weird creatures, like the duke’s courtiers all in black with devilish masks. Inside this void for contrast appears Gilda’s pure white bedroom, decorated with stars on its walls that come to shine at night to be backdrop for Gilda’s magnificent reverie “Caro Nome”. Worth going to Dresden for this moment alone.

Three great names in the forefront of opera today came together in Dresden in 2008 to bring this concept alive and throbbing with music of the highest quality. Diana Damrau caused a sensation not only with her thrilling radiant high soprano, but her exceptional portrayal of an innocent young girl who falls victim to the hatred and voraciousness of wicked and thoughtless people. The role of Rigoletto in which Verdi created a hero of heretofore unknown complexity is sung by Željko Lučić, now principal Verdi baritone for our time. Juan Diego Florez lends his exquisite bel-canto tenor voice to the hit studded role of the Duke of Mantua. Music Director Fabio Luisi’s direction has great rhythmic and dynamic drive and clarity, altogether a very sympathetic reading of the complete score. Not a note is missing.