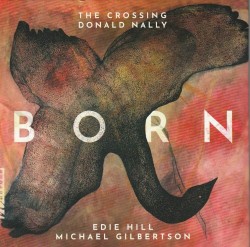 When classical radio stations seem agog with a cappella choral music who can fault them? After all, listening to human voices singing in multi-layered harmony sans instrūmentum is, indeed, irresistible. But when you are led to believe that the world of a cappella music is Voces 8 and, seemingly, no one else, surely something is amiss? I mean what about The Crossing directed by the masterful Donald Nally? What indeed…!

Consider the album titled Born featuring the work of the same name bookended by Returning – both by Michael Gilbertson – with a revenant interpretation of Edie Hill’s Spectral Spirits nestling in between. The two latter works have been commissioned specially for The Crossing, who return the favour with a magical performance from start to finish.

Gilbertson’s work is a mystical and transcendent fit for this mighty vocal ensemble. Nally and the singers navigate both works with absolute mastery. Born is an appropriately meditative unravelling of the evanescence of life. The gossamer-like Returning weaves epic narratives inspired by David and Jonathan. Hill’s Spectral Spirits dwell in light and dark. Perhaps they even summon the spectral shadow of Gérard Grisey.

Nally lets this music unfold with sumptuous expansiveness throughout. The polyphonic lines gracefully reveal themselves in this opulent recording. The singers of The Crossing produce a rich and wonderfully balanced sound, marvellous depth in the basses and a delectable fluidity in the sopranos. Truly this is a choir of great distinction.