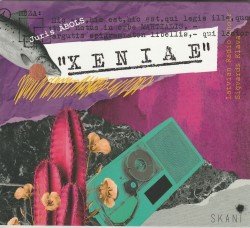 When encountering a piece of music for the first time, the brain begins searching for general thematic similarities: is this like Bach or Black Sabbath; Monteverdi or Miles Davis? While this “compare and contrast” method works well for most music, occasionally a listener is confronted by a single work that contains such a vast synthesis of styles that it is both disorienting and astonishing; such is the case with Juris Ābols’ opera Xeniae.

From the very first movement of this opera, we are introduced to a staggering tapestry of eras and references, including early-Baroque recitative accompanied by guitar and smooth jazz. As improbable as this may seem, the effect is both successful and addictive, for as we make our way through this staggering work, we can never guess what comes next, and this propels us forward with eager anticipation. There is, perhaps, no parallel to Xeniae in the world of classical music, for the breadth of material is simply too diverse, and it is rather similar in a number of ways to Pink Floyd’s The Wall.

What cannot be overstated is just how impressive the performance of the Latvian Radio Choir and its director Sigvards Kļava is on this recording, especially considering that the entire opera was recorded in the basement of Kļava’s home. Although an unknown name to many, Ābols makes a tremendous impact with Xeniae, and proves that he is one of the 21st century’s most eclectic and exciting composers. This disc is highly recommended, not only to those who favour classical music, but to those who appreciate any music, for there truly is something here for everyone.