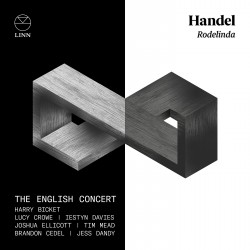 Success is a funny thing – sometimes it finds you, and sometimes you create it for yourself. This latter circumstance is the one in which Handel found himself in 1711 after bringing Italian opera to London with his Rinaldo and achieving tremendous success as a result. Over a decade later, Handel would revisit Italian opera in London through three separate works: Giulio Caesare, Tamerlano and Rodelinda.

Regarded as one of Handel’s greatest works, Rodelinda was first performed in London in 1725 but did not receive a permanent place in the modern opera repertoire until the Baroque revival movement in the 1960s. Since then, it has been staged in major opera houses across the globe and featured on numerous recordings, not the least of which is this stellar essay featuring the English Concert led by Harry Bicket.

From the opening notes, it is apparent that this performance of Handel’s masterpiece is well worth the time spent listening. The French overture has the requisite gravitas and agility, delightfully shaped and exquisitely performed, and it only gets better from there. Throughout this two-disc set it is immensely satisfying to hear such well-paced and thoughtfully performed interpretations, never ranging to extremes either in tempo or dynamic, always feeling that the singer and orchestra are collaborating comfortably, and allowing the singers themselves to express the dramatic intricacies of Handel’s vocal writing in a measured yet fluid manner.

Whether unfamiliar with Handel’s operas or a seasoned expert, this recording is a magnificent addition to any collection and an utter delight to listen to from beginning to end.