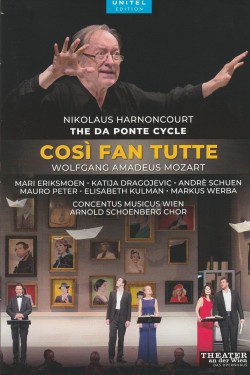 Collaborations between composer and librettist always create happy results, often the composer’s best operas, e.g. between Verdi/Boito, R. Strauss/Hoffmanstahl or Wagner/Wagner (as he wrote his own librettos). This is the case with Lorenzo Da Ponte with whom Mozart produced three of his masterworks: Figaro, Don Giovanni and Cosi fan Tutte.

Nicholas Harnoncourt’s long-cherished dream has been to conduct all three of them, one after the other, as authentically as possible, in an intimate setting with close collaboration with singers while still maintaining complete control. This is a concert performance, with bare stage, no sets or costumes. Singers sing from scores, but act and move freely, interact with each other and the emphasis is entirely on the music; the most beautiful music of the three operas according to connoisseurs.

Cosi fan Tutte means all women are fickle, deceitful (even Verdi’s Duke of Mantua sings it: La donna è mobile), a thesis proven by the philosopher Don Alfonso (Markus Werba, baritone) with an experiment on two sets of lovers Fiordiligi (Mari Ericksmoen, soprano) and Dorabella (Katija Dragojevic, mezzo) vs. Ferrando (Mauro Peter, tenor) and Guglielmo (André Schuen, baritone) in this hilarious comedy. And in the music, one beautiful piece after another. Like Fiordiligi’s angry outburst: Come scoglio immoto resta in Act One, or Ferrando’s Un aura amorosa so beautiful that even Harnoncourt sings along. Dorabella’s È amore un ladroncello is tempestuous and Gugielmo’s Donne mie la fate tanti is a swaggering boast of male pride. The clever and worldly chambermaid, Despina (Elisabeth Kulman), the interlocutor who helps Don Alfonso carry out his scheme, also sings a lovely aria Una donna a quindici anni that delights Harnoncourt and garners big applause.

“Something we had never heard before like this” says the Serbian newspaper Kurir, and that just about sums it up.