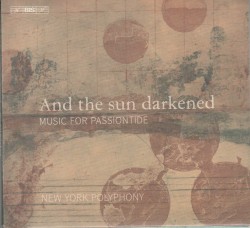 For as long as music has been written down, the Catholic Church has played an essential role in the development of the art form. Whether directly, as in early monodic plainchant and Palestrina’s polyphony, or tangentially, for example in post-Reformation works by Tallis in England and Bach in Germany, the influence of the Catholic Church has provided inspiration to composers for centuries.

New York Polyphony’s And the sun darkened surveys a range of Catholic-centric works, ranging from the 15th century to the 20th. With such an enormous body of material to work with and choose from, this release focuses its attention on music for Passiontide, the last two weeks of the Lenten season, using this specific and narrow segment of the liturgical year as its theme.

The focal point of this disc is the world premiere recording of Loyset Compère’s Officium de Cruce, a multi-movement motet cycle based upon a set of devotional texts focused on the Cross. A contemporary of Josquin who followed a similar career path, Compère was a Franco-Flemish composer who worked in Italy for the Duke of Milan (where Josquin would arrive a decade later). Officium de Cruce is expressive in its simplicity, exploring the text’s facets through spacious and effective settings, and New York Polyphony’s poised performance is a fine introduction to Compère and his works.

In addition to music by Compère’s contemporaries Josquin, Willaert and de la Rue, And the sun darkened contains two striking works by much more recent composers. Cyrillus Kreek’s Psalm 22 (1914) is a striking and evocative setting by one of Estonia’s greatest musical figures, while Andrew Smith’s Psalm 55, written in 2011, synthesizes old and new harmonic languages to produce a remarkably organic blending of medieval, Renaissance and modernist lexicons.

Far more than just a seasonal listen, And the sun darkened is a worthwhile exploration of fascinating composers and musical works expertly and sensitively performed by New York Polyphony, well worth listening to regardless of the time of year. 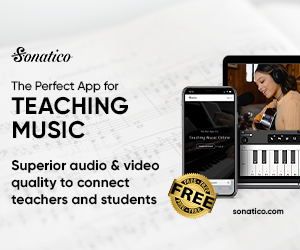