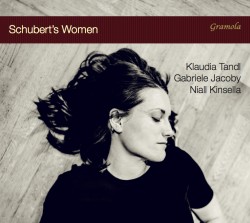 In his songs, Schubert reveals uncanny empathy for women – not just for the Romantic ideal of the eternal feminine, but for authentic, individual women. Irish pianist Niall Kinsella has put together this program of songs to feature some of those complex women Schubert was drawn to, from Goethe’s Gretchen and Mignon to Kosegarten’s Louisa and Schiller’s Thekla.  Austrian mezzo-soprano Klaudia Tandl voices their thoughts and feelings with both tenderness and drama. Austrian actor Gabriele Jacoby’s recitations of texts are rich with colour and insight, though it can be jarring to encounter them interspersed among the songs.

But Tandl is at her most moving when Schubert is directly describing the characters’ own suffering and joys in the first person. In Die junge Nonne, a young nun describes the turbulent longings which lead her to rapturous visions of the divine. Kinsella conjures up storms and church bells, while Tandl achieves sublimity with the closing repeated “Alleluia.”

Tandl and Kinsella’s perspective is so fresh and fruitful; I’m looking forward to hearing more of Schubert’s women-focused songs from them – especially the 12 songs he set to texts by women poets.