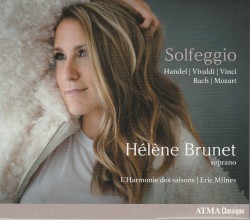 Solfeggio opens with Handel’s dynamic aria Scoglio d’immota fronte, which sets the tone for the rest of the album. Brunet’s impeccable technique is matched only by the beauty, warmth and fullness of her timbre in all of her vocal registers. Vivaldi’s Juditha triumphans is especially noteworthy, for the lone harpsichord accompaniment serves to highlight Brunet’s beautiful tone before she launches into a fully accompanied aria that requires great vocal gymnastics. The eponymous title, Mozart’s Solfeggio No.2, is an etude most likely written for Constanze Mozart in the early 1780s. The Solfeggio pieces (five in total) all require precise technique, which Brunet demonstrates in spades when she sings trills at very slow speed and sings the most lyrical of high notes.

Solfeggio should garner Brunet well-earned praise and a place of choice amongst other notable singers of the Baroque and Classical traditions.