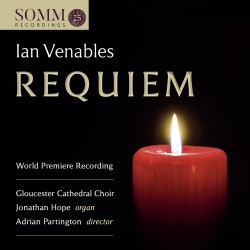 The requiem Mass is one of the most frequently set texts in all of music, with many of history’s greatest composers turning their pens to this ancient burial rite. Traditional settings date from the medieval era to the present and range from the contemplative (Fauré and Duruflé) to the bombastic (Berlioz and Verdi), while a number of 20th- and 21st-century settings incorporate additional texts, such as Britten’s War Requiem and Howard Goodall’s Eternal Light.

One of the most recent contributions to the requiem genre is Ian Venables’ 2018 Requiem, Op.48, which presents a selection of the traditional requiem Mass texts in a contemporary setting. Scored for chorus and organ, Venables composed this work with liturgical performance in mind; although this might seem to be a restrictive limitation when compared to the immense orchestrations of the great musical requiems, Venables uses the timbres and textures of both the organ and choir to produce a range of effects that reflect the drama, terror and peacefulness present in the text. This attentive and effective synthesis of words and music should come as no surprise, as Venables is a respected and highly experienced art song composer who has also written a range of instrumental and choral works.

Venables’ Requiem is characterized by a mixture of textures, woven together throughout the duration of the work to produce varying results. One such distinguishing feature is the use of modality, which often erupts into bright, open quartal chords that produce a luminescence not otherwise attainable in the major/minor system. While tuning is always of paramount importance for any performing group, it becomes even more so when non-traditional harmonies are used, and the Gloucester Cathedral Choir executes every such passage with precision and accuracy, breathing life into this mass for the dead.