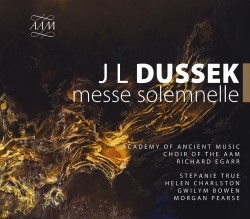 Jan Ladislav Dussek (1760-1812) is one of Western music’s most underrated yet influential personas, credited with guiding the expansion of the pianoforte’s range to six octaves and being the first performing pianist to sit with his profile to the audience, rather than facing them head-on. In addition to his work as a performer, Dussek was also a prolific and inspired composer, writing works which feature great lyricism and striking contrasts. Although once respected and highly regarded throughout Europe, Dussek fell out of popular favour after his death and performances of his works remain unjustly rare today.

Amidst this apparent neglect, the Academy of Ancient Music’s new recording of Dussek’s Messe Solemnelle shines a much-deserved light on this magnificent work and its creator. Discovered in the Conservatory Library in Florence in 2015, the manuscript score was transcribed by AAM director Richard Egarr and musicologist Reinhard Siegert, leading to its first modern performance in 2019.

A late classical-era work, the mass is reminiscent of the works of Beethoven and Mozart, with Dussek’s own unique voice at the forefront. Throughout the Messe one is struck by the beautiful melodiousness and expert craft in each movement; nothing feels extraneous or unnecessary, but rather that every note is exactly where it needs to be, resulting in a sound that is effortless and streamlined. As we expect with Dussek, the dynamic contrasts are extraordinarily effective and contribute tremendous energy to the entire work, both within individual movements and between the larger sections of the mass itself.

One of the world’s finest period instrument orchestras, the Academy of Ancient Music does not disappoint. From beginning to end, the care and attention they give to every musical subtlety and nuance breathes life into this newly discovered work, inviting listeners to embark on a journey of their own to discover Dussek and his Messe Solemnelle for themselves.