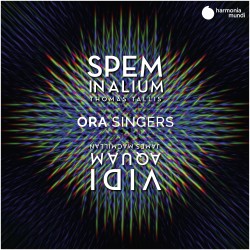 chief among them Thomas Tallis’ magnificent 40-part Spem in Alium, 450 years old this year. It is complemented by Vidi Aquam (2019) by Sir James MacMillan – also for 40 voices – an impressive 21st-century painterly commentary on the Tallis.

Spem in Alium (Hope in Any Other) was composed for eight choirs of five voices each. They interweave in many-layered, structurally complex ways on paper, and in performance in physical space. A high-water mark of the musical aspirations of the English Renaissance ruling class, as a composition it has long been acknowledged by its students as an apotheosis of European vocal polyphony.

Spem in Alium can be an emotional experience. Beginning with a single voice, other voices join in imitation as the music passes around the eight choirs, a study in constant change and metamorphosis, like a great river in motion. After brief tutti sections, the choirs sing in antiphonal pairs, throwing their voices across the space between them, all flowing together in the work’s powerful sonic tsunami finale.

Stephen FryThere was a plague around in Britain when Tallis wrote his music and there is a plague around now… ‘Spem’ translates as ‘Hope’; and this is about Hope for our future, and the future of the arts.” Amen.