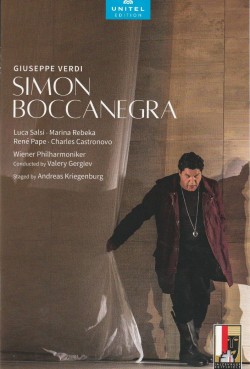 Verdi’s 21st opera about a 14th-century corsair who became Doge of Genoa had a difficult time. It failed at its 1857 premiere but Verdi never to give up, revised it drastically for La Scala in 1881 where it was vindicated, but the opera never caught on with the public until 1977 thanks to Claudio Abbado and the stereo era. This present reincarnation is from the hands of German director Andreas Kriegenburg who brought it into the present with its political turmoil, civil unrest, urban chaos etc., featuring people dressed uniformly in dark suits running around with smartphones. The set is architectonic, stark and monumental in black and white and fills the wide stage of the Grosses Festspielhaus admirably while creating a sinister and foreboding effect. Now and again we catch a glimpse of the Ligurian Sea in blue that’s picked up in the colour of Amelia’s dress, the only colour in the set.

Conductor Valery Gergiev, to whom the director dedicated the show, concentrates on the inner life and conflicts of each character and the lyricism of the music, although the latter gathers excitement and tremendous dynamics especially in the council chamber scene – a gripping focal point of the opera featuring Verdi’s masterful ensemble writing. The cast is superb: Luca Salsi is a strong but conflicted Simon Boccanegra with a warm lyrical voice. His pianissimo singing of the word figlia after the famous Recognition Duet is quite incredible. As his daughter Amelia, Polish soprano sensation Marina Rebeka, is a genuine treat and very strong in the high registers. American tenor Charles Castronovo is a youthful, passionate Adorno, her lover. Basso profundo René Pape, as Simon’s nemesis, is a dignified, noble Fiesco, with an impressive vocal range.