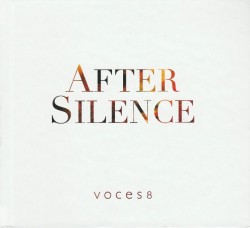 Multiple-award winning British vocal ensemble, VOCES8, has just released a two-CD collection rife with diverse works from Bach, Mahler, Monteverdi, Byrd, Britten, Dove, Fauré and more. Known for their eclecticism, the ensemble performs in a cappella format, in collaboration with a wide variety of orchestras and specialized ensembles, as well as with noted soloists. The title of this ambitious project refers to a quote from Aldous Huxley, “After silence, that which comes nearest to expressing the inexpressible, is music”.

The program here is divided into four sections: Remembrance, Devotion, Redemption and Elemental, with each containing enervating, multi-influenced compositions. Produced by Adrian Peacock and under the artistic direction of Barnaby Smith, the recording utilized the stunning natural acoustics of the Chapel of Trinity College at Cambridge, St. George’s Church in Chesterton and St. John the Evangelist in Islington. The uber-gifted members of VOCES8 include sopranos Andrea Haynes and Eleonore Cockerham; altos Katie Jeffries-Harris and Barnaby Smith; tenors Blake Morgan and Euan Williamson and basses Christopher Moore and Jonathan Pacey.

Remembrance begins with the sombre beauty of Orlando Gibbons’ Drop, Drop, Slow Tears, which initiates the emotional four-song exploration of the depth and nature of grief and loss. Through each track, the ensemble exercises not only magical dynamics, but a breathtaking relationship to A440 and heavenly intonation. The vocal blend and control of the respective vocal instruments here is nothing short of incomparable. Devotion examines filial, venal, sacred and romantic love as illustrated in Monteverdi’s heart-rending madrigal Lagrime d’amante al sepolcro dell’amata. Redemption and Elemental contain a nearly unbearable amount of beauty, but an exquisite track is Mahler’s Ich bin der Welt abhanden gekommen. In short – After Silence is perfection.