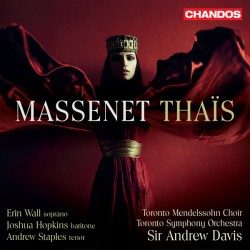 Jules Massenet may be best-known for his operas Manon and – his magnum opus – Werther, but it is for his opera Thaïs that he wrote arguably his most iconic piece of music: the gossamer-like Méditation for violin and orchestra. This five-and-a-half-minute interlude – a theme for everything that flows out of the Premier Tableau, Chez Thaïs – just after Thaïs, idole fragile, from where the entire work is raised to a level of great intensity and exquisite delicacy.

Massenet’s work is Wagnerian in more ways than one. Not only does he adopt (Wagner’s) dramatic, Germanic tradition but also dwells on the inner struggle between the spiritual and the sensual. Thaïs (1894/98), like his celebrated oratorio Marie-Magdeleine (1873), explores this theme. Thaïs, like other French music of the day, also reveals Massenet’s fascination with, and affection for, orientalism.

Based on Anatole France’s eponymous book, the story is woven into the cultural topography of Coptic Egypt – specifically Hellenistic Alexandria – where Thaïs earns the consternation of the Cenobites, especially Athanaël, the most rigorous ascetic of them all; and beguiles, among others, the wealthy voluptuary, Nicias. The titanic battle for Thaïs, body and soul – the struggle between spirituality and sensuality in Louis Gallet’s French libretto – is magnificently directed in this version by Sir Andrew Davis. Erin Wall’s Thaïs is lustrous and magical. Joshua Hopkins’ Athanaël is magical; Andrew Staples’ Nicias is superb, the TSO and the Toronto Mendelssohn Choir are in top form throughout.