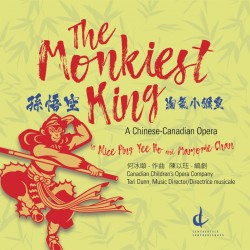 The Monkiest King is Canadian composer Alice Ping Yee Ho’s fourth opera. Commissioned by the Canadian Children’s Opera Company for its 50th Anniversary, the 60-minute one-act opera features the most excellent soloists of the CCOC and six choruses of different ages interpreting over 30 characters.

Marjorie Chan’s libretto is based on Wu Cheng’en’s Journey to the West, a 16th-century novel considered one of the greatest classical works of Chinese literature. The opera is mostly set in an ancient and imaginary magical world and follows Sun Wukong, the Monkey King. Initially a bit of a trickster, the Monkey King’s journey leads him on a series of adventures where he learns about personal responsibility, compassion and, ultimately, courage.

Primarily sung in English with Mandarin and Cantonese words, the language is accessible to a young audience, yet the story is compelling for a variety of ages. Personal growth is explored via life themes and lessons as opposed to the old-fashioned fable. The use of Chinese instruments such as the dizi, erhu, gaohu, pipa and guzheng allows children of all backgrounds to either connect with sounds they are familiar with or make exciting new discoveries. Ho’s skillful contrast between Chinese and Western instruments, the well-placed dissonances and the numerous vocal and instrumental glissandi provide a unique and vibrant listening experience. Most exquisite, Chan’s libretto and Ho’s music are expertly woven together, seamlessly moving the action forward. The Monkiest King was nominated for two Mavor Dora Moore Awards in 2019 for Outstanding Performing Ensemble and Outstanding Original Opera.