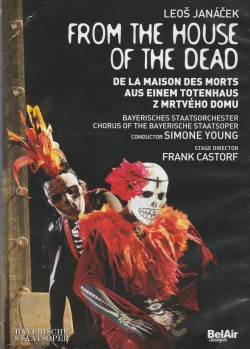 Janáček’s From the House of the Dead is a gripping dramatic work. The last opera he composed, this adaptation of Dostoyevsky’s novel premiered in 1930, two years after Janáček’s death, with an orchestration completed by two of his students. From the House of the Dead is notable for a number of reasons, including the use of chains as percussion in the orchestra (to reflect the sounds of the prisoners shuffling back and forth) and the lack of narrative content; there is no overarching storyline, but rather a number of episodic narratives relating to individual prisoners interspersed with occurrences within the prison itself.

This video release from the Bayerische Staatsoper is captivating, providing a gritty interpretation of Janáček’s work. Featuring an onstage cage in which the majority of the large ensemble cast is contained throughout the performance as well as superb costumes, including an homage to the famous Day of the Dead, the visual plays as important a role in this opera as the music. It is fascinating to see how this production so ably serves the dramatic requirements of Janáček’s opera and reinforces just how confined and uncomfortable this Siberian prison camp is, as told by Dostoyevsky.

The Staatsoper soloists, chorus and orchestra are superb throughout this short yet intense work, conveying the depth and darkness of the score without once coming across as melodramatic. One of the 20th century’s most profound and significant operatic composers, Janáček displays his mastery in full force in From the House of the Dead, and this production is highly recommended to all who enjoy this Czech master’s works.