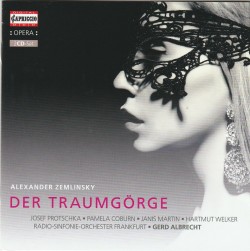 In 1907, Alexander Zemlinsky’s new opera Der Traumgörge was set to premiere at Vienna’s Court Opera. But after its conductor, Zemlinsky’s mentor Gustav Mahler, abruptly resigned as music director of the opera house, the production was cancelled. Zemlinsky was already well-established as a composer, pianist, conductor and teacher (his students included Schoenberg, Korngold and Alma Schindler, who later married Mahler). But it took almost 75 years for Der Traumgörge to get its first performance.

This version, recorded live at a concert performance in 1987, seven years after the much-delayed premiere, has long been unavailable. Now, with Zemlinsky’s music finally getting the attention it deserves, Capriccio has reissued it.

The psychological undercurrents of Der Traumgörge’s libretto by Leo Feld resonate with Freudian profundity. Görgesets off on a quest to find the princess he’s been fantasizing about. Instead he encounters a troubled woman, Gertraud. When she is brutally attacked for being a witch, Görge rescues her and brings her back home. Finally he figures out that she is the woman of his dreams after all.

Conductor Gerd Albrecht shows an incisive grasp of Zemlinsky’s opulent late-Romantic style. The terrific cast of singers get right to the heart of this inspired music. With the only other recording of this opera, James Conlon’s from 2001, unavailable, it’s disappointing that Capriccio did not include the libretto with this release. Otherwise, it’s a most welcome reissue.