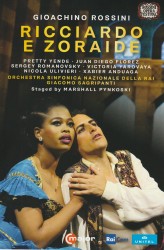 The Barber of Seville, La Cenerentola, La Gazza Ladra – familiar Rossini titles, but La Gazzetta? Ermione? Bianca e Faliero? All these, along with Ricciardo e Zoraide, were among the 14 operas emerging from Rossini’s conveyor belt during his busiest four years, 1816-1819. Most were soon forgotten amid this superabundance; Ricciardo e Zoraide, here making its DVD debut, was unperformed for almost 150 years until its revival at the 1990 Rossini Opera Festival in Pesaro, Rossini’s birthplace.

Agorante and Ircano are warring kings in medieval Nubia. Agorante lusts after his captive, Zoraide, Ircano’s daughter, who yearns for Ricciardo, her Christian-crusader lover. Disguised, Ricciardo attempts her rescue, but is captured. Zomira, Agorante’s jealous wife, plots the lovers’ downfall.

I won’t call this opera a neglected masterpiece. However, conductor Giacomo Sagripanti and the truly spectacular singing provide plenty of Rossinian thrills over its nearly three-hour duration, making this a must-have for all opera-on-DVD enthusiasts.