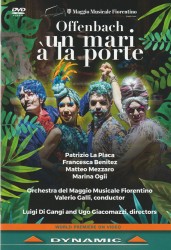 “Sheer silliness” were the words that kept coming to me as I watched and listened to this unfamiliar, 48-minute, one-act Offenbach operetta. Following the graceful, charming waltz-overture, Florestan (tenor Matteo Mezzaro) literally drops into Suzanne’s bedroom, falling through the chimney after scampering over rooftops to escape from a jealous husband. He hides when Suzanne (mezzo Francesca Benitez) and her friend Rosita (soprano Marina Ogii) enter, fresh from Suzanne’s wedding party. Rosita extols the delights of dancing the waltz in the operetta’s hit number, the effervescent Valse Tyrolienne.

Henri, the groom (baritone Patrizio La Placa), arrives at the bedroom door, only to find himself locked out – to avoid being discovered by Henri, Florestan, now out of hiding, has locked the door and thrown the key out the third-floor window. Stuck outside the bedroom, Henri adds his voice in an exuberant quartet, a sparkling example of Offenbach’s high-spirited “patter” music. Finally, after Henri manages to find the key in the garden, it all ends happily, with the newlyweds reunited and Florestan and Rosita potentially altar-bound themselves.

The exaggerated silliness of the plot is reflected in the exaggerated, silly costumes, makeup, props and gestures by the animated cast in this 2019 Florence production, while conductor Valerio Galli keeps it all bubbling along. My only cavil: adding another one-acter would have made this fun-filled but very short DVD even more desirable.