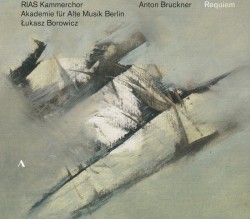 Pious and naïve, church-organist Anton Bruckner may never have shed his lumbering manner and rustic accent but his massively soaring music attests to his ability to communicate the redemptive force of the divine. The composer, however, found his true musical vocation when he saw Wagner conducting a performance of Tannhäuser in Linz. In what became a kind of Wagnerian moment, Bruckner realized (like Wagner) that in order to move forward he must assimilate and then break every theoretical rule in the proverbial book.

Bruckner’s legacy, enshrined not only in his symphonic works, rises to prominence in his choral music, the most vaunted being the Te Deum. Bruckner was, after all, a devout Catholic and his faith pervades all of his music, considered to be Gothic cathedrals in sound. Requiem (the disc) is a magnificent example of Bruckner’s majesty as a composer of spiritual material not least because of these performances. No less than four of the eleven works on this disc are premiere recordings.

Perhaps the most moving work is the Libera in F Major. But the Requiem in D Minor is the crowning glory. It evokes the mass tradition of Mozart and Haydn, the lyricism of Schubert and the austerity of Bach. Moreover, the Requiem presents the grand melodic roar of the organ, moaning trombones and soaring voices of the RIAS Kammerchor and Akademie für Alte Musik Berlin which combine to provide the most intensely moving Bruckner music ever recorded.