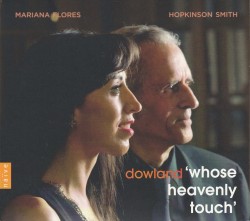 Perhaps the most renowned composer of music for lute and voice in the history of the genre, John Dowland’s songs continue to captivate modern performers and audiences with their esoteric melancholy and expressivity. Far from being a downer, Dowland’s seemingly depressing themes were as much a practical choice as an artistic one, reflecting the melancholia that was so fashionable in music at that time. In fact, Dowland wrote a consort piece with the punning title Semper Dowland, semper dolens (always Dowland, always doleful), reflecting his tongue-in-cheek self-awareness.

Whose Heavenly Touch presents selections from Dowland’s First and Second Book of Songs, published in 1597 and 1600 respectively, and begins with the striking and enduringly popular Flow, my tears. This recording features Argentinian soprano Mariana Flores and American lutenist Hopkinson Smith, who has received numerous accolades for his work in a wide range of early music, from Dowland to lute arrangements of Bach’s sonatas and partitas. From the beginning of this first song through to the disc’s end, Smith’s mastery of the lute is apparent in his clarity and control, arpeggiations and scalic interpolations providing rhythmic motion through tasteful and virtuosic interpretation.

Perhaps the most conspicuously atypical aspect of this recording is Flores’ distinct Spanish accent, a rather disorienting imposition on this Tudor music which can occasionally mask textual subtleties through excessively rolled “R”s and unexpectedly modified vowels and diphthongs. While her tone and interpretations are delightful, it occasionally takes attentive listening to discern the words that Flores considers worthy of such thoughtful expression.