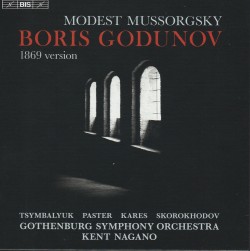 Mussorgsky’s Boris Godunov with its grandeur, epic sweep and forward-looking music is possibly the greatest Russian opera, but it had a difficult time. The original “dark and raw” 1869 score had to be revised drastically to be acceptable for the Imperial Theatre in St. Petersburg; later Rimsky-Korsakov (and Shostakovich) changed the orchestration to suit Western ears. It was Rimsky-Korsakov’s version that became successful outside of Russia. Now there is a trend towards authenticity so Kent Nagano, music director of the Bavarian State Opera, chose the original score for the opera’s visionary avant-garde and very successful revival in 2013, in Munich. He later performed it in Stockholm in concert form which is the basis of this recording.

The original version is brutal, concise and dark-hued and concentrates mainly on the Tsar Boris – who came to the throne by murdering the legitimate heir – his ascent, his struggle with a guilty conscience and a final decline into madness.

Nagano’s selection of Alexander Tsymbalyuk, relatively young and a voice more lyrical than that of the legendary Chaliapin (who owned the role for decades), was ideal for the vulnerable and tormented Boris. Of the other bass voices, young Finnish basso Mika Kares (Pimen) and Alexey Tikhomirov (Varlaam) with his iconic song Once upon a time in the city of Kazan, stand out. The tenor Grigory, the false pretender who causes Boris’ downfall but curiously disappears from the plot after a short appearance, is Sergei Skorokhodov. Another protagonist, the Chorus, “the voice of Russia” ,has tremendous power, but the real star is Nagano who is by now one the greatest conductors of our time. His superb control and total immersion into the score remind me of Abbado a generation before him.