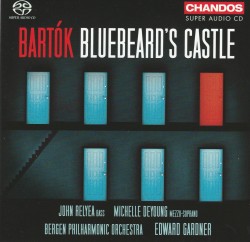 There are many fine recordings of Bartók’s gothic, two-character psychodrama; this one is special because both singers have made this opera their own, performing it around the world. As a tandem, American mezzo Michelle DeYoung and Toronto native, bass John Relyea, have sung these signature roles on many stages from Carnegie Hall to the Sydney Opera House.

It’s essential that Judith and Bluebeard be, as here, evenly matched vocally and dramatically, in their life-or-death battle of wills. (I’ve attended performances featuring very unequal pairings.) DeYoung’s impassioned singing convinces us of Judith’s love for Bluebeard and her determination to bring light into his gloomy abode, demanding to see what lies behind his castle’s seven locked doors. Relyea’s firm, resonant bass, plumbing the emotional depths of Bluebeard’s ghastly secrets, makes him today’s definitive Bluebeard.

Conductor Edward Gardner relishes the phantasmagoric colours and textures of the largest orchestra Bartók ever used, creating vivid sonic imagery of the grim, blood-soaked scenes behind the opened doors. The fortissimo tutti when the fifth door opens to reveal the magnificence of Bluebeard’s realm and Judith’s ecstatic, sustained high-C reaction, is truly one of the most thrilling moments in all opera.

The Hungarian-sung text is included along with an English translation. Librettist Béla Balázs’ two-minute spoken Prologue, not always performed, is also heard here, asking (in Hungarian) “Where did this happen? Outside or within? Ancient fable, what does it mean…? Observe carefully.”

Listen to this CD carefully, too.