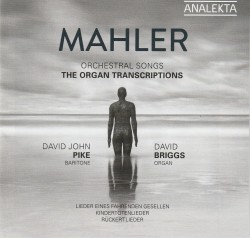 The English organist David Briggs, a student of the renowned Jean Langlais, is no stranger to these parts, having served as artist-in-residence at the Cathedral Church of St. James in Toronto from 2012 to 2017 before moving on to his current post at the Cathedral of Saint John the Divine in New York City. Briggs is also a composer, a stalwart transcriber of the improvisations of the legendary Pierre Cochereau, and an arranger with a particular interest in the symphonies of Mahler, five of which he has refashioned for the organ. He is joined on this recording by the excellent young Canadian baritone David John Pike (now based in Luxembourg) in commanding performances of Mahler’s Lieder eines fahrenden Gesellen, Kindertotenlieder and Rückert-Lieder orchestral song cycles.

One might think it a bit of a stretch to re-imagine these works in this unusual context, but in truth Mahler rarely ventures beyond three-part writing even at his most gargantuan moments and these works are routinely performed in the composer’s own piano versions. Briggs’ thoughtful choice of timbres reflect Mahler’s own instrumentations quite convincingly. The recording venue is quite an interesting one: The Basilica of Constantine (Konstantin-Basilika) at Trier, Germany dates from the beginning of the fourth century. Burned in an air raid in 1944, subsequent repairs exposed the original inner brick walls; at the back of this spartan edifice hangs a newly built organ from 2014 designed by the firm of Hermann Eule. Though Eule normally specializes in neo-Baroque Silbermann-era designs, this particular installation is symphonically arranged with 87 stops (over 6000 pipes) on four manual works and pedal, making it the largest organ in Trier and offering a vast palette of exceptionally beautiful tones to choose from.