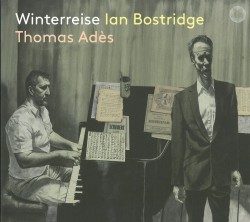 Ian Bostridge reaffirms the case for Franz Schubert’s Winterreise being the greatest of song cycles; it’s also famous for the number of times it has been recorded – including seven times by the great lyric baritone Dietrich Fischer-Dieskau. This Pentatone recording is Bostridge’s third and that makes ten recordings by two of the finest exponents of lieder the world has ever seen.

In Winterreise Schubert takes the despondency which closed Die schöne Müllerin and pushes it to extremes creating a desolate landscape (both inner and outer) of unrelenting pessimism. Even Schubert’s friends, who understood the pain from where it sprung, were reportedly dismayed by the bleakness of the song cycle.

Bostridge brilliantly cloaks himself in Schubert‘s rejected lover, driven to the verge of madness as we follow his lonely peregrinations through a snowbound landscape. Thomas Adès’ pianism highlights the emotional veracity of the performance.

As the lover’s journey progresses, his vision becomes more inward and the subjectivity of the songs more pronounced. The final song, Der Leiermann, is a masterstroke: the traveller meets a destitute hurdy-gurdy player, whose rustic song Schubert mimics with a quirky piano figure. The wanderer wonders whether he should go with him but his question is left hanging in the air as the song drifts away. If Fischer-Dieskau’s baritone voice heightened the gloom, Bostridge’s tenor enhances the cycle’s drama through contrast between vocal tone and meaning.