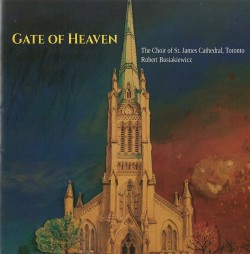 Imagine if someone gave you only 13 sentences to summarize an entire calendar year; how would you represent the happenings of 365 days in a hundred-or-so words? This is the challenge that Robert Busiakiewicz and the Choir of St. James Cathedral undertake with Gate of Heaven, which distills the liturgical year into 13 distinct musical offerings. Gate of Heaven follows and summarizes the trajectory of the church calendar, using an extensive range of landmark works for choir and organ to identify and commemorate feast days, including Christmas, Epiphany and Easter.

Even before the disc begins, one is struck by the emphasis Busiakiewicz and his ensemble place on works from the 20th and 21st centuries: Rautavaara, Vivancos, Kodály, Poulenc, Vaughan Williams, Willan, Gareth Wilson and Stephanie Martin are all represented here, comprising ten of the disc’s 13 selections. In a context where conservatism is only slightly less than a rule of law, such exploratory programming is a laudable movement in a satisfying direction.

The Cathedral Choir’s musical and interpretive execution of this significantly challenging material is commendable for its flexibility and range. The approach taken towards Willan’s The Three Kings is so unlike that of the Kodály Gloria, itself strikingly different from Gombert’s Agnus Dei, that the listener is transported through the centuries with minimal disruption. While all works are clearly performed by the Cathedral Choir, they vary their approach and stylistic techniques to fit the composer and time period, rather than painting dissimilar works with the same brush. In short, this disc is a noteworthy achievement by a noteworthy ensemble, and we are fortunate to have such gifted performers at the corner of King and Church streets every week of the year.