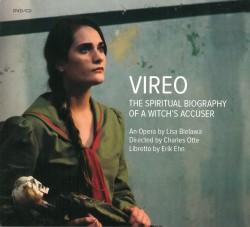 Composer Lisa Bielawa conceived the idea of the young teenage heroine Vireo, who is lost in the world of visionaries, witch hunters, psychiatrists and artists in her auditory and visual hallucinations. Set to the libretto by Erik Ehn, the 12-episode, over-two-hour opera directed by Charles Otte was originally made for television and online viewing. There is no stage here – sets include forests, indoors, a monastery, and even the Alcatraz Prison. The singers and musicians share the action locations equally, all shot by a single camera as the opera weaves almost cryptically from 16th-century-France witchcraft all the way to the present day.

Bielawa’s dense score includes tension-building interval repetitions, nods to minimalism, descending chromatic lines, percussion effects, piano chords and even touches of familiar children’s songs. The Kronos Quartet sets the opening musical stage with violin solo to full quartet to the San Francisco Girls Chorus singing to the clear, beautiful voice of Rowen Sabala as Vireo. Sabala was herself still a teenager performing in this production and her work is amazing, from her troubled gyrations and twitches, interchanges between her mother (Maria Lazarova), Doctor (Gregory Purnhagen), teenage cohort Caroline (Emma MczKenzie), and real/imaginary witches. Though too numerous to mention, all the singers and musicians perform and look convincing.

Highlights include piano clunks as the Doctor moves his scary, lengthy medicinal needle towards Vireo; the piccolo making bird sounds sets the stage as the action moves back in time in Beginner: The Cow Song segment, though distressing, breaks into humour as a hilarious horn band performs in front of a cow while the others grab a grilled meal. Up to nine identical frames at once visually build the girls’ tensions in Boarding School. Sharp bright and dark lighting, atonal music, and hurdy-gurdy solo in Alcatraz build tension and grief. Orchestra members dressed in lab coats and characters in circus costumes fuel the busy Circus, featuring a successful stereotypical Queen-of-Sweden operatic performance by Deborah Voigt until the calming final solo departure of Vireo into the forest in My Name is Vireo.

The libretto is shown on the DVD yet the clear CD production makes understanding words with music manageable. Whether one watches the DVD film or listens to the CD, the detailed intense magic of music, sound, and visuals are uniquely compelling, troubling and entertaining! Everyone involved in the production and performances deserves a standing ovation.