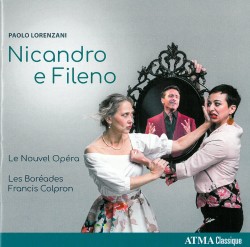 Le Nouvel Opéra and Les Boréades de Montréal are Montreal-based companies dedicated to musicologically and performatively reviving, remounting and reimagining music of the Baroque era (1600 to 1750). Clearly committed to the authenticity, accuracy and specificity of this intricate music (along with its detailed performance practices), historical musicology and creative performance coalesce here on this 2018 recording to shine a light on music that otherwise would run the risk of being relegated to the footnotes of music history.

Here, the first ever recording of Nicandro e Fileno, Paolo Lorenzani’s (1640-1713) pastoral opera for six singers that was initially performed, in Italian, in 1681 before Louis XIV at the palace of Fontainebleau, is brought to life by an aggregation of thoughtful scholars, practitioners and performers. And while there is no doubt that the ensemble, under the skillful direction of conductor and Boréades founder Francis Colpron, is dedicated to the period piece accuracy of this music, these sides are not fusty and this music is not ossified. Rather, new life has been imbued across all three acts, and the once-forgotten Italian-style opera comes alive on this beautifully captured and rendered ATMA Classique recording. The music, along with its unpacking of the still-relevant and universal themes of love, along with its trials and tribulations, brings escapist joy to general music fans and early music enthusiasts alike in these troubled times. A detailed accompanying booklet capturing extensive historical notes and the opera’s libretto is a welcome addition.