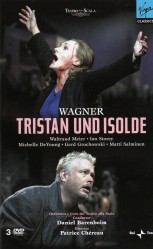 On December 7, 2007 an event that reverberated throughout Milan took place at La Scala with the greatest artists gathered to breathe new life into Wagner’s immortal masterpiece.

The main reason for the celebration was the re-emergence of director Patrice Chereau who as a young firebrand created the centennial Ring in Bayreuth in 1976, a revolutionary concept that started a chain of new productions all over the world. Now 30 years later and no longer young he was persuaded to do a much more difficult task, Tristan. There is nothing revolutionary here, however. His production is almost traditional. The sets are unobtrusive, neutral in colour, quasi abstract and echo timeless reality, the stage movements are relaxed, exquisitely handled almost like a ballet. The action erupts only when the music calls for it, like the finale of the first act or the fighting in the third. In this framework Chereau allows his singers to act naturally and so optimize their talents.

Waltraud Meier (Isolde) is a wonderful singer-actress who has sung the role many times and simply lives in it. She is the crown of the production. Her interpretation is so convincing, so spontaneous that it’s near perfection in itself. Ian Storey as Tristan, a relative new-comer, is steady and a ‘tidal wave of power and passion’ - especially in the third act where he abandons himself totally as the suffering hero. The other three principals, Michelle deYoung (Brangaene), Greg Grochowsky (Kurwenal) and Matti Salminen are theatrically and musically all on the same level as the protagonists.

The musical triumph however belongs to Daniel Barenboim who proudly steps into the formidable tradition established by Böhm, Furtwangler, Kleiber and Karajan. He forms his own style with well thought out tempi and details, making the Scala Orchestra sound glorious and exciting. This is production that will go down in history.