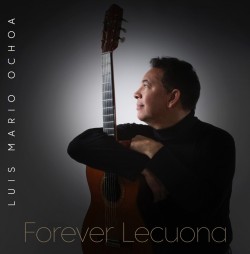 Ernesto Lecuona, known as “the Gershwin of Cuba,” is the subject of the latest release by singer-guitarist Luis Mario Ochoa. Since Lecuona wrote both music and lyrics during his prolific and celebrated career, I suppose he’s both George and Ira Gershwin. Indeed, his most famous work was done in the field of operetta and film (for which he was nominated for an Academy Award), and Ochoa includes several of those tracks, lovingly reproduced here.

You couldn’t find a more authentic interpreter of this music than Ochoa, who was born and raised in Cuba and studied the great masters during his musical education at the University of Havana. Cuba’s loss was Toronto’s gain when Ochoa emigrated here in 1990 and became a bandleader and regular feature on the club circuit. Ochoa has drawn on the deep Toronto talent pool for the world-class musical support on this album, including gifted multi-instrumentalist Louis Simao on bass, fellow countryman Hilario Duran on piano (no electronic keyboards here!) and Luis Orbegoso and Chendy Leon on percussion.

With songs dating back to the early 1900s, this is a nostalgic but still relevant collection of classic Cuban sounds. Themes of heartbreak and longing never go out of style, do they? Neither does dancing, and this album will surely inspire you to get on your feet and take a turn around the floor. This may be especially true for non-Spanish speakers, as all the songs are in that language, of course. But everyone speaks the language of uplifting rhythm and Ochoa’s beautiful guitar playing and bright, plaintive singing clearly convey the message.