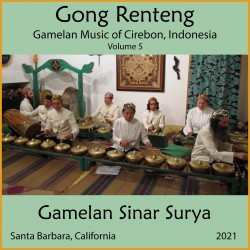 The ancient region of Cirebon, located in Northwest Java, Indonesia is home to a large number of performing arts including several types of gamelan, the orchestral music indigenous to Java. California group Gamelan Sinar Surya (GSS), directed by Richard North – the gamelan director and lecturer at UC Santa Barbara – specializes in the performance of all types of Cirebonese gamelan. North, who has been studying, teaching and performing this music since 1972, is a passionate international authority on Cirebonese music.

Cirebon gamelan music has been under-represented on records. GSS has however been assiduously addressing that lacuna. Impressed with the comprehensive scope of its growing recorded catalogue, I’ve reviewed its previous albums in The WholeNote, most recently in the November 2019 issue. The latest GSS releases cover two attractive antique pre-Islamic Cirebon gamelans: gong renteng (Gamelan Music of Cirebon, Indonesia: Vol.5) and denggung (Vol.6). Significantly, both distinct genres appear to predate the better-known five-tone prawa/slendro and seven-tone pelog gamelan types which appear to have emerged later in the 16th century. With its crashing cymbals, lively drumming and energetic tempos, gong renteng is a lively village gong ensemble type believed to date back to the 1400s – making it the oldest gamelan music in West Java. Denggung on the other hand is dramatically different in performance aesthetic. Its softer volume and spare, peaceful, sometimes ritual mood better suit an aristocratic milieu.

Vol.5 – Gong Renteng: Gong renteng came to the brink of extinction a generation ago. Thanks however to the dedication and enthusiasm of young musicians in the Cirebon area – plus the concerted efforts of Richard North for over 40 years – this ancient music has recently experienced a revival resulting in several gong renteng festivals in the region. Over 18 instrumental tracks the album’s repertoire is split between pelog and slendro tunings, each evoking a different affect. The music is also enlivened by idiomatic vocalizations made by the Californian musicians. This delightful sonic touch captures the inner spirit of Cirebonese village-style gamelan performance. 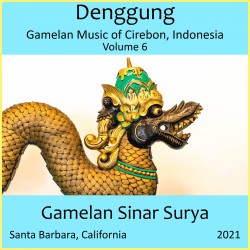 Vol.6 – Denggung: With roots in the Hindu Pajajaran kingdom of West Java some 500 years ago, denggung is considered a rare, sacred gamelan. The atmospheric music on this album makes it clear that GSS has taken great care to honour that heritage. Out of the three Cirebonese palaces, only the denggung at the Kacirebonan Palace is still being played today. GSS is however giving back to the home culture by working closely with the palace ensemble to foster a healthy future for this beautiful and moving music.

These two albums are a testament to how gracefully a Western group can, with respect, embody the music of another culture – and spread it around the world.