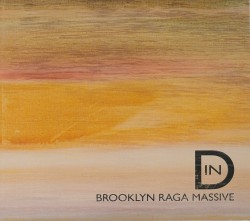 Terry Riley’s iconic minimalist composition In C (1964) is scored for an indeterminate number and kind of instrument or voice. A drone-like pulse on the note C synchronizing the ensemble guides its performance, while superimposed repeated phrases give the work a phasing effect. (Riley had been deeply influenced by his studies with Hindustani classical vocalist Pandit Pran Nath.)

Hailed as “Leaders of the Raga Renaissance” (The New Yorker), Brooklyn Raga Massive was founded in 2015 by sitar player and composer Neel Murgai. Given the diversity of instruments and musical backgrounds of the group, BRM chose Terry Riley’s adaptable In C to record in 2017. Then at Riley’s suggestion in 2020, BRM members took inspiration from In C’s form and composed a new work. It is interpreted by 25 musicians on the album In D, each of the three sections set to a different Hindustani raga (Indian classical melodic mode). Within that framework improvisational instrumental and vocal solos are balanced by effectively composed tutti passages and drum features.

Musicians and instruments from numerous traditions playing together can prove a challenge; this album manages to avoid many of the pitfalls. Adding to the cultural diversity here, while there’s certainly an emphasis on the classical Indian soundworld, other traditions unexpectedly and delightfully come to the fore before receding back into the sonic prevalent texture.

In recognition of the pandemic context the recording was made in, the three ragas were selected to “match the pandemic situation we now face. We plunged from our normal happy lives into darkness and [now] finally… we have hope.” The joyful communal sprit of In D gives me hope too.

Listen to 'In D' Now in the Listening Room