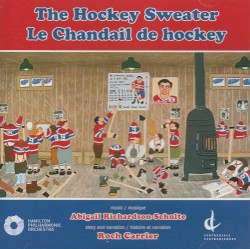 Who would we Canadians be without our favourite winter sport, hockey? And how about those Team Canada Juniors! …Countless intense discussions have taken place about the rivalry between the Montreal Canadiens and the Toronto Maple Leafs. No wonder Roch Carrier’s popular 1979 short story The Hockey Sweater is such a hit. Set in 1946 Saint-Justine Quebec, life revolves around school, church and most importantly boys playing hockey, each wearing the Montreal Canadiens Maurice Richard Number 9 hockey sweater. But the story’s young hero needs a new one so his mother orders it from the Mr. Eaton, who sends him a Toronto Maple Leafs jersey instead. Aargh, intrigue…

Commissioned by the Toronto Symphony, National Arts Centre and Calgary Philharmonic orchestras, composer Abigail Richardson-Schulte worked for a year composing The Hockey Sweater before its 2012 premiere. Her musical storytelling is immaculate and supports, yet never overpowers, the spoken story, here dramatically and clearly narrated by Carrier himself in separate English and French tracks.

Many musical styles surface throughout, from the opening quasi-traditional Québécois fiddle tune to the use of organ in the church, school and, of course, hockey rink fanfare! Dramatic writing emphasizes story moments, like string slides with the hair glue story (the boys would use “glue, lots of glue” to emulate their idol Richard’s hair style), softer sadder music with the Leafs sweater arrival, horn and string interludes, and a final string reel with closing horn note and percussion hit. Intermittent audience cheering (and booing) throughout adds to the musical imagery.

Richardson-Schulte is currently composer-in-residence with the Hamilton Philharmonic Orchestra, and serves as artistic director of the HPO’s What Next Festival. Under the direction of Gemma New, the HPO come together in a well-balanced and joyous team effort in what has become an annual highlight of the orchestra’s winter season. The Hockey Sweater shoots and scores!!