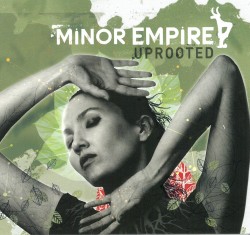 Minor Empire, the Toronto group at the vanguard of Turkish-based world music in the country, is led by singer-songwriter Ozgu Ozman and electric guitarist and synth programmer Ozan Boz. Founded in 2010, the band attracted kudos early on for its debut recording Second Nature. It garnered several significant Canadian Folk Music and Independent Music awards. It’s been touring ever since. The same qualities which propelled the band to the top of the Canadian world music radio charts – Ozman’s limpid renditions of traditional Turkish folk songs and her own compositions with Turkish lyrics, accompanied by Boz’s electro-funk soundscapes – also serve Minor Empire very well in Uprooted. Exclaim! cited the music’s “slinky, duby… rhythms” while other reviewers have tagged it dreamy, trip-hop-inspired and stylishly hip.

However you categorize it, the star here is Ozman’s voice. Her use of characteristic Turkish vocal ornamentation in the songs, sung in Turkish, is relaxed yet focused, warm and expressive even to those unfamiliar with the language. A large part of this music’s accessibility to general Canadian audiences is no doubt due to Boz’s studio-savvy vernacular-infused settings. The presence of notable band members in Uprooted – guitarist Michael Occhipinti, bassist Chris Gartner, drummers Ben Riley and Mark Kelso, percussionist Patrick Graham and several other guest musicians – also confirms those positive assessments.

Even if you don’t understand a word of Ozman’s lyrics, you’re still in trusted, satisfyingly hip musical hands here.