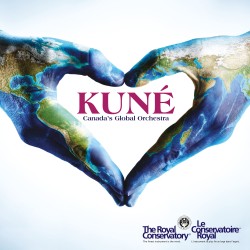 Launched last year as the New Canadian Global Music Orchestra, the Toronto ensemble self-described as “Canada’s Global Orchestra” has recently been gifted with a name change. Rebranded KUNÉ, it has produced an ambitious eponymous debut album as its calling card. KUNÉ means “together” in Esperanto, the most widely spoken constructed language in the world. With one of its core tenets being “to foster harmony between people from different countries,” it’s an apt language with which to succinctly express the raison d’être of this multicultural musical group.

The ensemble consists of 13 virtuoso Canadian resident musicians each with deep roots in a different country’s music and language, plus Métis fiddler and singer Alyssa Delbaere-Sawchuk. Under the skilled artistic direction of the JUNO Award-winning trumpeter, composer and “cultural inventor” David Buchbinder, this album is the first permanent record of KUNÉ’s “journey to create a band that looks and sounds like Canada today.”

The opening track features Delbaere-Sawchuk’s suite We Met in Tkaranto. Locating the band’s project firmly on native land, the track twigs us to the multi-border-crossing musical journey ahead. Delbaere-Sawchuk’s confident fiddling at first welcomes the listener to what sounds like familiar Celtic territory. It’s only when the kora, sitar and other world instruments enter that we realize that this album aims to add layer to multicultural musical layer.

To detail the vast range of musical and cultural influences, instruments and music genres traversed in the album’s 14 tracks is impossible to do succinctly – let alone to adequately assess the artistic and cultural resonances generated. I won’t hesitate however to state that repeated listening will gradually reveal plenty of music to explore for the globally curious sonic traveller. They will find both musical riches and a worldview-affirming transcultural harmony.