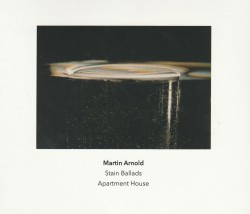 Canadian composer Martin Arnold’s illustrious compositions over the decades are so very much his own sound. Here UK-based ensemble Apartment House perform four works in which Arnold strives to combine lyricism with formlessness in his self-described “stain ballads.” As Arnold explains on the Another Timbre label’s website, “Stains are … always stain-shaped but don’t present a form… form and content are the same thing.”

Opening track Lutra (2017) for cello and humming is given a slow and reflective performance by Apartment House founder and director, Anton Lukoszevieze. The high-pitched cello opening leads to a lower-range bowed melody, with alternating high and low pitches united by humming and delicate cello lyricism. Stain Ballad (2016), for seven-piece orchestra, also encompasses the contrasting ideas of held string notes, here versus detached piano lines and percussion throbs, as all the instruments are musically balanced and blended in Arnold’s expert “story-telling” orchestration. 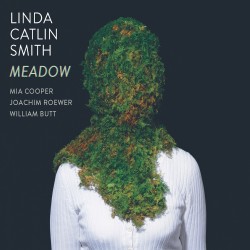 The enchanting stillness and hypnotic beauty of sprawling mossy fields has been captured ever so deeply by Linda Catlin Smith in her new work, Meadow, for string trio. This gentle music paints an endless moment amid the green-lit swaying turf. Sonorous pulsating chords and brief melodic offerings envelop the ears much like cascading grassy plains wrapping around bark and stone. Smith’s unparalleled command over the fusion of colour and harmony is immediately captivating. This sound world is a tapestry woven with delicate care and personal magic. At times, the distinctly fragmentary material forms echoes in the mind’s eye: glimpses of forgotten images begin to surface and radiate throughout the heath. The trio’s performance (Mia Cooper, violin; Joachim Roewer, viola; William Butt, cello) on this release was accomplished with extraordinary intimacy. The pureness of tone and capacity for expression result in a profoundly successful interpretation of Smith’s poetic intention.

This recording comes as the first release in an initiative from the Louth Contemporary Music Society, titled out of silence, to produce meaningful recordings under the exceptional conditions of the pandemic. While the pandemic continues to be a struggle for many, we thank artists for their commitment toward creation and for reminding us why we need art in our lives. When listening to the striking grace of Smith’s Meadow, many things come to mind and many emotions are felt throughout – I suppose this can all be summarized with the phrase “Thank you.” 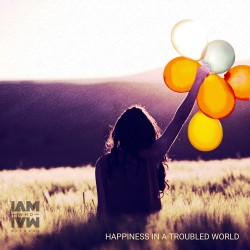 Written as an offering to a world in need of healing, Happiness in the Troubled World is a potent mixture of ambient sounds and well-thought-out musical ideas. This music has the potential to shift your energy, calm your mind and expand your awareness.

Frank Horvat’s latest album is inspired by the Dalai Lama’s book The Art of Happiness in a Troubled World. Six compositions bear the titles of the final six chapters of the book and each is inspired by a quote from that book. Choosing an ambient electronic genre allowed Horvat to create a perfect musical vessel for expressing the noble ideas of empathy and compassion, hope and optimism. The building and ever-changing layers of sound generate the feeling of being in the womb of the world that is mending and healing. The textures throughout are smooth, unperturbed. In each of the compositions Horvat creates the safe space for a listener to expand their own aspirations for the world we share.

The album opens with peacefully neutral Coping with a Troubled World. It then continues with pulsing sounds and bright piano in Hope, Optimism and Resilience. The lightness and joyfulness increase with each composition until the final number, Empathy, Compassion and Finding Happiness in the Troubled World, brings an incredible sense of peace.

If you are looking for a meditative, calm sonic space that induces happiness and optimism, this album is perfect for you. 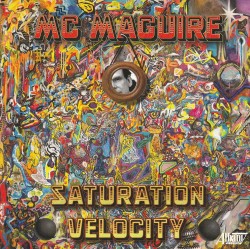 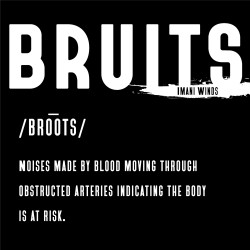 The American quintet Imani Winds present Bruits, the title work on their new release. Vijay Iyer’s title references medical terminology for sounds caused by arterial blockages. The theme of the disc is social/racial injustice. The ensemble playing is superb; individually and collectively the group is strong; the material they champion is compelling. Four of the five members of the group are people of colour, whose own writing in the accompanying notes underlines how they are affected by their country’s ingrained injustices.

Polemics that entertain are rare, but Bruits bridges the divide: the first movement, Gulf, is exhilarating writing brilliantly covered by the quintet and pianist Cory Smythe. In the second movement, Force, ensemble members recite the U.S. “Stand Your Ground” law over a percussive ostinato, performed by the members of the quintet. Iyer wrote the work during the period of the murder trial of George Zimmerman, killer of Trayvon Martin. Thus the meaning of the piece comes into focus: Bruits as a blockage, not of the circulatory system but of justice in the U.S. It’s shocking, and riveting. The five movements carry tremendous emotional power.

The Light Is The Same (2016) by Reena Esmail, is a single-movement work reflecting unease felt in the wake of the U.S. presidential election that year. The material, two distinct ragas, attempts to depict reconciliation between them. In Sometimes, Frederic Rzewski makes various affecting uses of a deconstructed melody: Sometimes I Feel Like a Motherless Child. 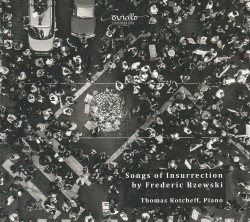 Veteran American composer and virtuoso pianist Frederic Rzewski (b. 1938)It’s still true that most Americans care more about the price of meat than they do about the exploitation of Bolivian miners.”

Already 45 years ago Rzewski set the bar high in his 1975 The People United Will Never Be Defeated, an hour-long piano tour de force of 36 variations on a Chilean workers’ song. It has received over 15 commercial recordings to date, the first of which garnered a 1979 Grammy nomination. His even more epic Songs of Insurrection (2016) is Rzewski’s eloquent sequel to his 1975 masterwork. Presented here in its first recording by brilliant early-career American pianist Thomas Kotcheff, the composition reaches to the music of the world’s peoples for inspiration. Each of the seven movements is inspired by a song from a different country.

For example Die Moorsoldaten (The Song of the Deported) was written by prisoners of the Börgermoor concentration camp, Ain’t Gonna Let Nobody Turn Me Around is an American civil rights hymn and Oh Bird, Oh Bird, Oh Roller dates from the Korean Peasant Rebellion of Donghak.

On one level Songs of Insurrection takes us on a global journey through social uprising. On a musical level the work is a sophisticated compendium of multiple piano idioms. They range from 19th-century romanticism, modalism, to pantonality, serialism and haunting experimental sounds coaxed from inside the piano.

Rzewski hailed this performance as “magnificent.” I too was swept away by the emotion in this work brought to life by Kotcheff’s passion and authoritative command of his instrument.