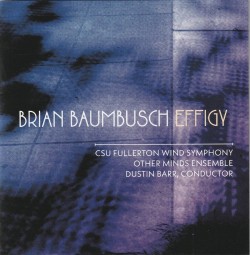 Hard to know whether I would have felt the same way about this quirky and interesting music had I opted not to read the extensive liner essay, by Oscar Smith, that accompanies the roughly 60 minutes of music by Brian Baumbusch on Effigy. It would be fair to say the reading was less interesting than the listening, yet unfair to call the essay uninteresting; a bit lengthy, a bit academic, but certainly informative. Knowing Baumbusch’s complex processes aroused some skepticism, and I was relieved to hear that the resulting textures and colours are much more than an exercise in synchronous unmatched pulse.

The science of polyrhythm guides but doesn’t completely determine Baumbusch’s aesthetic. There are what feel and sound like multiple layers of events randomly superimposed one on the other, but the effect is distinctive and listenable.

Kings, a multi-movement piece for chamber ensemble including strings, percussion, piano and clarinet, occupies the longer half of the disc. Written as a kind of homage to composer Lou Harrison, the fourth track, Interlude, is a rhythmic canon. Among Harrison’s innovations was an 11-limit just intonation guitar (a tuning system based on the harmonic overtone series). Played by Baumbusch on Boru, the fifth track of the disc, it leaves me feeling more enamoured of just intonation than before.

The other work on the disc is Isotropes, for large ensemble. Clever title, clever writing, cleverly played by the Cal State University Fullerton Wind Symphony, each member having recorded their part in isolation. One has to wonder what amount of tailoring and refitting might have been needed to coax uniformity from the large (c. 60-voice) ensemble.