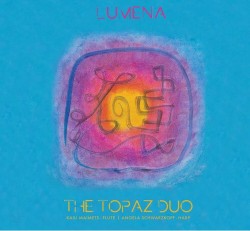 Based in Toronto, in-demand flutist Kaili Maimets and Juno Award-winning harpist Angela Schwarzkopf founded Topaz Duo over a dozen years ago. In addition to playing the classics, they have increasingly been curating repertoire by living composers. Their sparkling, assured new album illustrates their focus on new works for the flute and harp with an emphasis on Canadian content.

The program begins with prominent younger-generation Estonian Canadian composer Riho Esko Maimets’ five-and-a-half-minute Lumena. Composed in Toronto, the work unusually combines the qualities of yearning (the composer says it’s for the beauty of the peaceful Baltic landscape) and meditative stillness.

Prominent Canadian composer Kevin Lau’s four-movement Little Feng Huang is the next track, extensively inspired by one of his own works of fiction. Written expressly for the album, the “combination of flute and harp – delicate and wondrous – was an ideal vehicle for this particular story,” writes Lau.

The virtuosic three-movement Sonata for Harp and Flute by Kingston Ontario composer Marjan Mozetich is my album favourite. Recorded for the BIS label by the eminent earlier Toronto duo, Robert Aitkin, flute and Erica Goodman, harp in 1985, it has since become among the most played Canadian works for these instruments. On full display is Mozetich’s mature post-modern Romantic compositional style blending the traditional, popular and modern, filled with lyricism, Romantic harmonies and spirited moto perpetuo-like rhythms. This tightly structured piece avoids lapsing into banal diatonic clichés: the ideal closer for Topaz Duo’s debut record.

Listen to 'Lumena' Now in the Listening Room