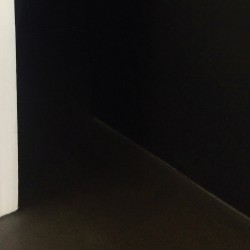 Cage’s notation of these pieces features two time-based categories: fixed and flexible “time brackets.” Fixed-time brackets indicate when the musician/s should precisely begin and end a tonal event. Flexible-time brackets however, allow musicians choice in the matter, admitting into the performance, a) chance and b) the anarchic harmony of sounds and silences simply co-existing, two key Cagean notions.

Both works on this album belong to that corpus. One7, “For any pitched instrument able to play sustained notes,” is the seventh piece in a series of compositions for one musician. Except, in this performance the polished Montreal group Quartetski have decided to interpret the open score with all four member musicians: Isaiah Ceccarelli (percussion, synthesizer), Bernard Falaise (electric guitar), Philippe Lauzier (bass clarinet, synthesizer) and Pierre-Yves Martel (electric bass, sine waves).

Four6, also for unspecified forces, also lasts a leisurely half hour. The four musicians are asked to “Choose 12 different sounds with fixed characteristics (amplitude, overtone structure, etc.)” producing a mellower soundscape than the dramatic musical moments generated in One7.