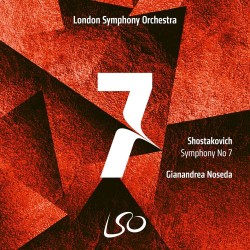 As I remember, this symphony was performed in Toronto in the 1980s, Gunther Herbig conducting, and I was there and cherish the memory. Today, however, in the 21st century it comes to us in state-of-the-art high resolution technology, live and conducted by a onetime frequent visitor to Toronto, Gianandrea Noseda. His career is currently sky high and this projected complete series of Shostakovich symphonies is very promising.

The Seventh and the Eighth are the so-called War symphonies written during the Second World War. Symphony No.7 was written in 1941 during the Siege of Leningrad where the composer lived and suffered through the starvation, unable to escape. The score was microfilmed, smuggled out to America, conducted by Toscanini and became an international sensation.

Briefly, the symphony begins optimistically on a high note on the strings and the winds with astringent, unusual harmonies. What follows is the most important part of the symphony, a steady crescendo of a single theme repeated endlessly from nearly inaudible ppp step by step, layer upon layer. First, strings and flute, adding bassoon, then full woodwinds, the entire string section and finally the brass culminating in a shattering fortissimo (that could blow your speakers!). This is the so-called war theme with the snare drums beating constantly like soldiers marching. (Ironically the theme is partially lifted from Lehar’s Merry Widow). Peace is restored temporarily in the quiet second movement, followed by a beautiful Adagio third that leads into the Finale without interruption. The ending is magnificent with the brass triumphant, no doubt in reference to the Soviet victory at Stalingrad.

This is a highly inspired, exciting and monumental work heard here in a most worthy performance.