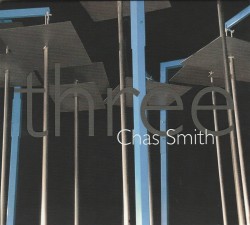 Multi-instrumentalist Chas Smith’s recording Three is not simply atmospheric, its ethereal sonic palette comes with a twist in that the ripples on his ocean of sound spread vertically, seemingly piercing the very dome of the sky. Even the title is subtly idiomatic; its reference being more Trinitarian than merely numeric.

The musical hypnosis begins almost immediately in the whispered, metallic hiss of a myriad of instruments on Distance, continuing through The Replicant and into the denouement of this recording on a piece aptly called The End of Cognizance. The composer says that “the spirit of Harry Partch” pervades throughout. But even a first run-through of this repertoire suggests overtones of the soundtrack of a Philip K. Dick cinematic narrative. In particular, the short story Do Androids Dream of Electric Sheep? – which became Ridley Scott’s Blade Runner – comes presciently to mind.

The music throughout seems to hang in the air like dense vapour of a sonic kind. But the seeming stasis is constantly changing, metamorphosing into something quite different at every turn. Its dark melodic fragments spin and pirouette constantly, revealing Smith’s singular balletic lyricism. The three parts of the music are layered one atop the other like sonic strata evocative of the massive natural forces pervading a planet spinning its way into infinity in triumph against time. The orchestration is as brilliantly inventive as the instruments that are employed to play it; all constructed by Smith himself.