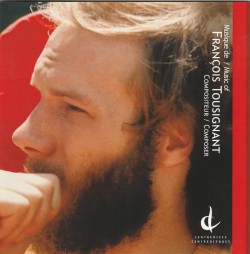 The varied career of François Tousignant (1955-2019) included music critic for Le Devoir (1994-2005), Radio-Canada columnist, professor at Universities of Ottawa and Montreal, and composer of over 40 works. In commemoration of the second anniversary of his death, this double-disc release features a memorable tribute concert recording of Montreal-based instrumental Ensemble Paramirabo, with three guest vocalists, brilliantly performing eight of his chamber pieces from 1973 to 1987.

Understandably, Tousignant did not compose during his years as the music critic. His output reflects a composer with modern atonal technique, clear delicate lyrical scoring and respect for the written word.