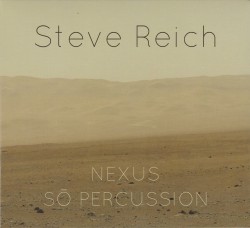 Reich’s music is generally characterized by repetition, canons, slow harmonic changes and, for a time, the adoption of selected musical notions from West Africa and Indonesia. By the mid-1960s Reich sought to create music in which his compositional process was clearly discernible by the audience in the music itself. From 1965 to 1971, his style was dominated by a process called “phasing,”  a kind of Escher-like perceptual magic where incremental changes to the music being performed are revealed to the listener in real time.

All those compositional and performative approaches deeply colour the brilliantly performed music on this album: Clapping Music (1972), Music for Mallet Instruments, Voices, and Organ (1973), Mallet Phase (2016, based on Piano Phase 1967), and Quartet (2013). The first three, controversial in their day, have become contemporary standards. , a jazz-inflected work scored for two vibraphones and two pianos, is an outlier in this program. Reich called it “one of the more complex [pieces] I have composed.” While frequently shifting key and continuity by restlessly changing metres, the outer sections maintain a pulsed momentum, a recognizable link to Reich’s earlier compositions. In stark contrast, the middle slow movement introduces chordal harmonies unusual in his music, evoking a peaceful, pensive mood.

This is Nexus’ 31st commercial album release – and a resounding way to celebrate both its 50th anniversary and its deep and enduring relationship with Reich.