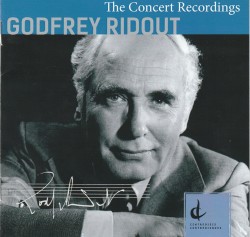 Godfrey Ridout (1918-1984) was “an old-school gentleman,” conservative in deportment, attire (three-piece suits) and compositional style. I knew him also to be very accessible, forthright and warm-hearted – just like his music! This welcome CD presents concert performances from 1975-1993, drawn from the CBC archives.

Cantiones Mysticae No.2 – The Ascension (1962) is set to a sixth-century hymn sung in English by sunny-voiced soprano Janet Smith, Brian Law conducting Ottawa’s Thirteen Strings. As the text proclaims, it opens “with a merry noise and… the sound of the trumpet” (played by Stuart Douglas Sturdevant). One line in the serene second section – “Rescue, recall into life those who are rushing to death” – was, wrote Ridout, his son critically ill during its composition, “a cri de coeur… that really struck home.”

Gratifying listening for all who remember Godfrey Ridout – and all who don’t!