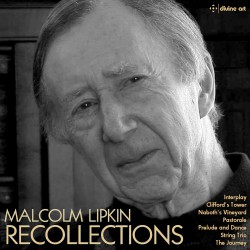 I first listened to chamber works by British composer Malcolm Lipkin (1932-2017) while studying music in Europe in 1982. I was strongly moved by his combination of traditional compositional sounds with touches of the modern. I do not remember what the works were, but this collection of seven compositions spanning 50 years of creation is fabulous and respectful.

The four recent recordings contribute to Lipkin’s legacy. Prelude and Dance (1987) is his tribute to Jacqueline du Pré. Its tonal Prelude has interesting piano chordal pitch jumps and ascending cello runs. Dance is fun with subtle major/minor tonality shifts and high tinkling piano with repeated cello notes. The Journey (2016), a tribute to John McCabe, is delightfully played by John Turner on recorder, with memorable ornamental turns breaking up the colourful held notes. Naboth’s Vineyard (1982) and Interplay (1976) complete this over 80-minute long release.

Repeated listening adds to my appreciation, as the musicians all perform with thoughtful, precise musical detail. Lipkin’s works may be slightly old-fashioned but they are memorable.